Anyone? Anyone? Bueller? Bueller?

When you spend time looking back at how Ferraris have been used in the movies, a trend emerges. Cars have represented many things on film over the decades: a means of escape, a way for characters to begin personal journeys, or just the path to freedom. But, as we all know, a Ferrari isn't just another car. It's not even just another expensive sports car. A Ferrari is the “ne plus ultra” of sports cars. Screenwriters choose to include a Ferrari in their work because it is a sign not just of possessing wealth and power, but of having arrived. Let's face it, owning a Ferrari in a movie is the equivalent of having tickets to the Original Cast performance of Hamilton on Broadway. It means you've arrived.

Being loaded with meaning allows this sign of success to take on a metaphorical quality too. And nowhere does this metaphor get more heavily loaded with Oedipal concerns than in that psychological thriller from 1986 “Ferris Bueller's Day Off.” OK, I'm joking obviously. “Ferris” is everyone's favorite High School fantasy! Fooling the 'rents, hanging out with friends, making all your dreams come true in one glorious day … what a carefree, fun-filled romp. That is, until you consider the character of Cameron.

Cameron Frye, Ferris's best friend, is a sad, morose, downer of a teen with some psychological baggage who seems to have wandered in from a much more serious film. He is the one character to act as a bulwark against Ferris' flights of fancy, the one to express reservations and fears, the one who always has an answer to Ferris's eternal question of “Why Not?” (For goodness sake, he wears a belt and suspenders! He doesn't take any chances!) Cameron has a long list of reasons why they should not take his dad's Ferrari, skip school, head into Chicago, spend the day soaking up all the city has to offer. From a screen writing angle, we understand why this dialogue needs to take place—Ferris would be a madman fantasist without a healthy dose of skepticism to tether him to reality. But Cameron is at best a drip, and at his worst, a deeply damaged young man who is a miserable hypochondriac with major daddy issues. Afraid to loan Ferris his father's treasured possession, his 1961 Ferrari GT California Spyder, Cameron allows himself to be browbeaten and finally tricked into taking the car out of it's private garage, and driven, top down of course, into the city as a means of freeing themselves from the drab confines of their banal suburban existence.

Everything is great, until the car is taken out for another joy ride by the garage attendants that the gang trusted to keep the car safe. 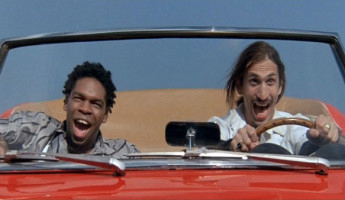 After they return to the garage, pick up the car, and head home, Ferris notices that the Odometer has picked up an extra 175 miles. Upon seeing this, Cameron screams, then becomes completely catatonic. Finally returning to Cameron's house, Ferris comes up with a way to fool Cameron's dad—they will just prop the car up on a bumper jack, put the car in reverse, and place a brick on the accelerator. Problem solved, right? Not so fast, Ferrari speedo senders don't work like that! Sure, until … the miles don't come off. Ferris suggests cracking the odometer open to access the tape so they can roll the miles back by hand.

At that point, Cameron loses it. He's ready to confront his father and demand that he pay more attention to his son than this car. He begins kicking the bumper (no, we didn't see any Hill Engineering bumper skid plates on the car either!), the grill, and the headlights, causing enough damage that his dad will finally have to pay pay attention to him and his actions. He will be ignored no longer.

Of course, putting his foot up on the bumper is enough for the car to fall off the jack and roll backwards through the glass window of the garage, crashing into the forest below.

(Relax--as this was a specially built replica car, no actual Ferraris were damaged during the filming of this scene.) Screenwriter and director John Hughes really gets his sledgehammer out now to hit us all over the head with his point that parents shouldn't invest more time and energy in things than their kids. Or kids are more important than things. Or live life to the fullest. (Really, just take your pick of any of these cliches—they all work.)

Or you can fix a car easier than a wrecked kid. I'd like to think that if there was a deleted scene that showed us Mr. Frye returning home to the carnage, we would next see him shipping Cameron off to a place where he could get some intensive psychological help, convincing his therapist to call in a prescription for more valium, and then contacting Ricambi America to reorder all the parts that his mechanic will be needing to over the next 9-12 months. Then maybe we would hear the anguish in his voice as he cried out something along the lines of “This is all my fault!” And we would have to agree—he is a terrible parent. And a loaded symbol of the mixed-up value system that we now associate with the excess of the 1980s. And, most importantly, he was the one who didn't lock the garage.