Here's a handy way to tell if your friend who claims to be a huge Ferrari guy really knows his stuff—ask him about the cars on “Miami Vice” (NBC 1984-1990). If he says, “Wow, what a cool car I loved that Ferrari,” you'll know he's just a casual fan. If he says, “Well, I liked the Testarossa, but the Daytona was a fake,” you'll know unlike Sonny Crockett's car, he's the real deal—A True Ferrari Fan. 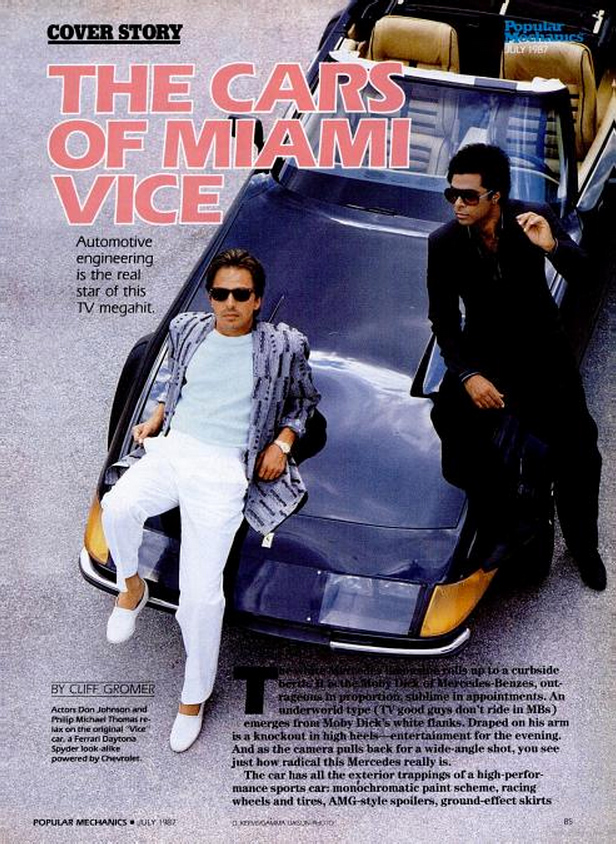 “Miami Vice” was both completely of it's time and way ahead of it. The show took things we thought we knew and made us look at them in a different way. Consider the setting: the bright and sunny pastel hued landscape of daytime Miami, turned seedy and dangerous at night in the 80s, as drugs, crime, and violence became the norm. Consider the cops themselves: Detectives Sonny Crockett and Ricardo Tubbs didn't dress like any cops we'd ever seen—linen suits with tee shirts and loafers with no socks.

And consider the cars. Since these were no ordinary cops, they couldn't drive ordinary cars. Enter the Ferrari Daytona Spyder GTS/4 replica. Because Ferrari turned down the production's request for an actual Ferrari, “Miami Vice” producers commissioned two “lookalikes”: cars with Corvette chassis fitted for modified fiberglass body panels that were designed to look just like the Daytona Spyder. Ferrari was not thrilled with this set up and offered the show's producers two free Testarossas on one condition: that the replicas be destroyed. So, the producers complied, wrote a script for the beginning of Season Three where the Daytona was blown up, and presented Crocket with his brand new 1986 white Ferrari Testarossa.  Oh, did we mention it was an uber-awesome single flying mirror variant? 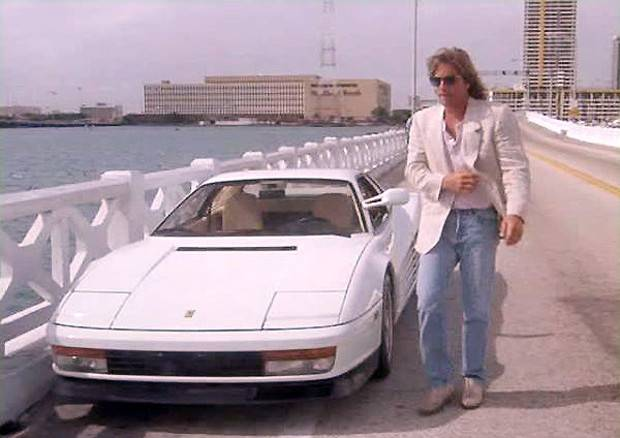 Though the original Testarossa donated to the production were black metallic, the show painted them white. Different explanations have been given to explain the paint job: some say Don Johnson dented the car's grill and front panels while driving the car on set, others claim that the black color didn't photograph well in the show's many night scenes. Whatever color, the producers must have loved their new cars, because Season Three was filled with closeup shots of the car's interior and manual gearbox, wheels (single lug knockoffs) along with an abundance of Ferrari emblems, badges, and logos.  Perhaps the producers thought a Ferrari horn button was important to the script?

The 80s may be over, but our love for this Testarossa lives on. If looking at these pictures has made you want to ditch the socks, dig out the Ray-Bans, and cruise down to South Beach in your very own white Testarossa, we hope you'll keep Ricambi America in mind to help keep your dream car running smooth.